Emergency Legal Preparedness and Response: A Decade of Unprecedented Challenges

From the inception of the Network for Public Health Law in September 2010, emergency legal preparedness and response issues have been a significant component of its mission and objectives. By the end of the decade, public health emergency laws and policies would completely dominate all of society globally. 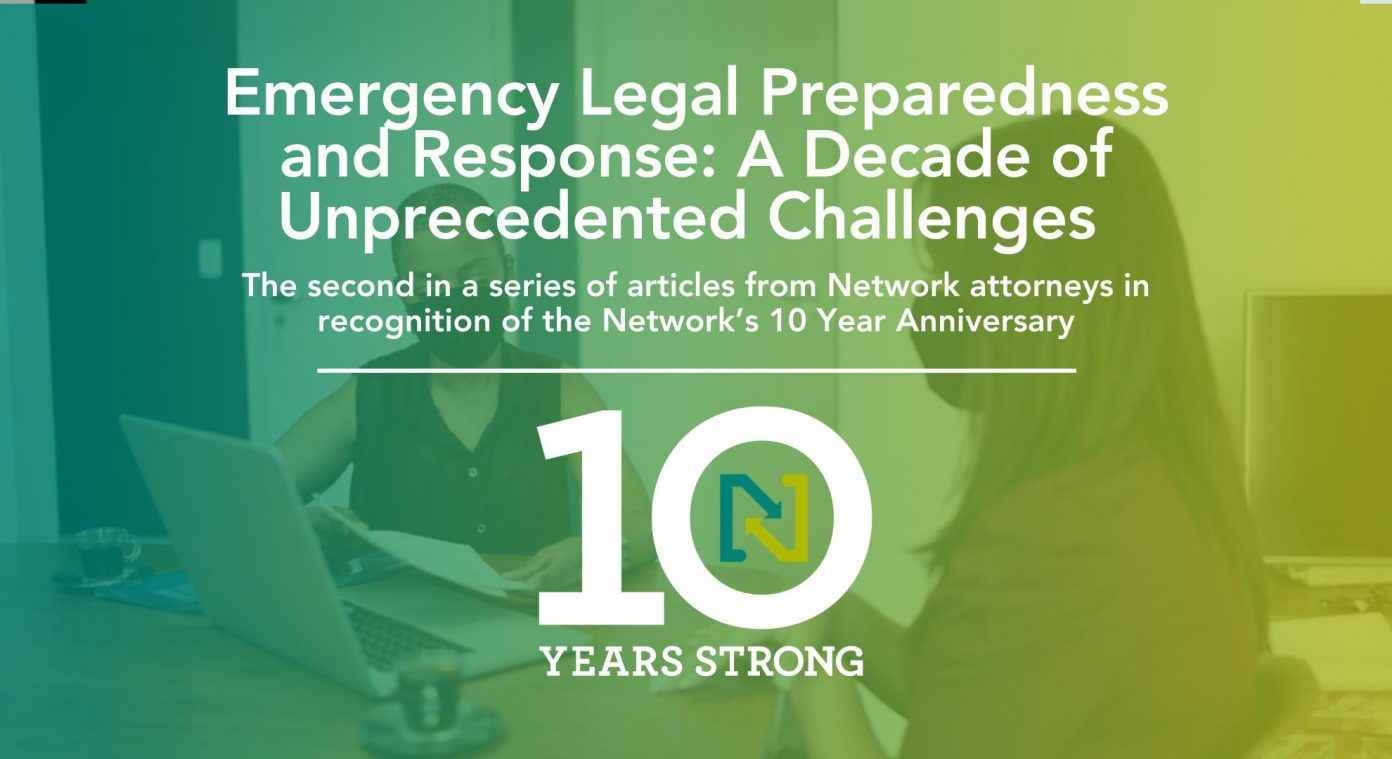 I remember well the initial meetings we held in the Summer of 2010 in St. Paul, Minnesota to organize the Network offices and personnel, and prioritize issue areas. Network regional directors, including Kathi Hoke (Eastern Region Office), Gene Matthews (Southeastern Region Office), Denise Chrysler (Mid-States Region Office) and founding National Director Dan Stier (Northern Region Office) divvied up the U.S. states into five distinct regions, whose offices have remained largely intact over the past decade. Our Western Region Office included 11 states, from Texas through the Pacific Northwest, as well as Alaska and Hawaii.

Then came a process of selection and assignment of issue areas. To assure the Network could deliver on its goal of providing real-time and non-partisan technical assistance on a bevy of core topics, Network regional directors took on specific areas of law or policy as national points of emphasis — for example, the Mid-States Region Office chose health information and data sharing and the Eastern Region Office selected injury prevention and safety.

With a decade of experience already in emergency legal preparedness and response, I advocated for the Western Region Office to serve as a national leader on this topic. Little did I know what or how this topic would forever change the field of public health law over the course of the decade.

The Network actually began in the midst of a national public health emergency — the 2009/2010 H1N1 pandemic. From the onset, requests for technical assistance poured into the Western Region Office.  We worked with federal entities (HHS, ASPR, CDC, FDA, the National Academy of Medicine), state and tribal public health agencies, local health officials, hospitals, insurers, academics, media, and policy-makers. Initial concerns as to whether H1N1 was the “big one” dissipated, but led to substantial legal and policy reforms predicated on the need for pandemic preparedness.

Emergency laws and policies were already a hot topic, but additional controversies lay ahead. The decade brought substantial new public health emergency threats. Horrific outbreaks of Ebola viral disease (EVD) in West Africa in 2015 had only tangential impacts on Americans. Yet, the specter of infection was real.  With the arrival of a single, infected airline passenger, Thomas Eric Duncan, in October, 2014 in Dallas, Texas arose a cavalcade of national and regional law and policy concerns.  Before expiring from EVD at a local hospital (which initially turned him away for treatment despite clear risk factors), Duncan infected at least two nurses, one of whom travelled to Ohio unknowing of her own risks.

The media storm over these incidents, coupled with high profile efforts to screen, quarantine, or isolate health care workers or others returning from Ebola “hot zones,” generated dozens of immediate inquiries for technical assistance in the Western Region Office. I still remember the month of October 2014 when we handled nearly 180 specific requests for technical assistance on emergency preparedness and response.

The Network’s responses personified what I have previously labelled the practice of legal triage —or the capacity to identify and resolve legal issues in real-time in emergencies. Amid epidemiologic uncertainties rose a flood of inquiries. Everyone wanted immediate answers to difficult legal preparedness and response issues implicating profound constitutional concerns and delicate political issues. Real-time interpretations of existing and forthcoming laws and policies were essential to quell Americans’ fears of a condition that killed nearly 50 percent of those infected overseas.

The Ebola crisis was a true test, but it was dwarfed later by the worst national public health emergency the U.S. had ever experienced with over 500,000 deaths to date. If you’re thinking COVID-19, you’re a step ahead. The national opioid crisis was classified by multiple states as an emergency beginning in 2014, prior to October 26, 2017 when HHS declared it a national public health emergency.

HHS’ public health emergency declaration concerning the opioid epidemic has been renewed extensively and continues to this day—as do the ravages of misuses of a class of prescription and illicit drugs that have impacted Americans across all socioeconomic classes. Extending over two decades in the U.S., solving the opioid crisis is riddled with legal and policy challenges. Emergency powers and responses have helped remedy some immediate risks to Americans, but systemic legal changes and substantial litigation are essential to remedy others, as per the focus of efforts of Network colleagues including Corey Davis, Amy Lieberman, Gene Matthews and Kathi Hoke.

What policy-makers and media were willing to label a “public health emergency” or “crisis” became so skewed by the end of the decade in 2019 as to obfuscate the concept. That is, until the COVID-19 pandemic hit.

Even as I write, the most costly public health emergency event in multiple lifetimes rages on. With over  30 million cases reported in the U.S., 550,000+ American deaths, and countless impacts of short- and long-term morbidity, the pandemic is already, and will forever be, a game-changer in U.S. legal preparedness and response.

Unprecedented declarations of emergency across every level of government for months on end coupled with never-before-seen utilization of social distancing measures and other public health powers completely reshape what a public health emergency can entail. Nothing else remotely compares.

Absorbing over 1,100 direct requests for COVID-19 technical assistance in our Western Region Office alone (and extensive others requests across the four other regional offices) in the last 12 months, the Network has risen to the challenges of real-time, sustained response efforts. Along the way, we’ve observed the immense power, scope, and breadth of emergency public health authorities. Public health laws have directly and forever changed the lives of every American in response to the pandemic.

We’ve also chronicled limits of emergency responses, sometimes related to legal barriers or inaccurate interpretations. More  often, public health responses have been restricted via political or social influences at the crux of a “tug of war” between protecting the public’s health and maintaining economic interests. Finding an appropriate balance in a sustained pandemic is precarious.  When asked awhile back by a reporter “What’s more important to Americans—saving lives or saving jobs,” I noted that it’s a question we cannot ask Americans we’ve lost since the inception of the pandemic.

Like President Biden, whose ascendancy to the Office is tied to his promise to topple the pandemic, I often remember Americans we’ve lost. I see the Network at the forefront of the positive use of law as a tool for saving lives, especially in emergencies. To some it seems a travesty that federal, state, or local government failures to use known, efficacious legal interventions have unquestionably contributed to excess deaths among Americans. I agree.

Yet, it is also worth remembering that execution of public health legal interventions have actually saved countless American lives during declared emergencies. Against a stealthy condition like COVID-19, adherence to the rule of law and efficacious public health interventions is the best defense we’ve got. How we wield these powers effectively and lawfully is subject to change in the century ahead.