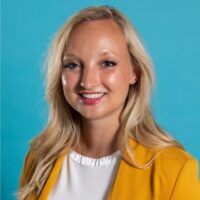 Brianne Schell, J.D., serves as a Staff Attorney with the Network for Public Health Law Eastern Region, as well as with the Legal Resource Center for Public Health Policy at the University of Maryland Carey School of Law. Her passion for public health and policy began with her undergraduate studies – she received her Bachelor of Science in Public Health with a specialization in Sociology from the Ohio State University College of Public Health in 2018. Since then, she has volunteered with legal and human services organizations, conducted legal and policy research with the Ohio General Assembly, the Centers for Disease Control and Prevention, and multiple non-profit public health-focused organizations. Brianne received both her JD from the Ohio State University Moritz College of Law and her MA in Public Policy and Management from the Ohio State University John Glenn College of Public Affairs in 2021. When she isn’t working, Brianne enjoys travelling both within the US and internationally, marking eight countries off her list thus far (China, India, Finland, Estonia, Italy, Germany, Netherlands, Czech Republic), and hoping to do more of northern Europe after the pandemic.