Tobacco Control: A Decade of Challenges and Change

Tobacco use, particularly smoking, has been the leading cause of preventable death in the United States for decades. Since the release of the first Surgeon General Report on smoking in 1964, the public health community has made great strides to reduce tobacco use initiation and to increase tobacco use cessation. The past ten years have seen significant changes in tobacco regulation. Just as the tobacco industry has changed tremendously in the last decade, so have the laws designed to reduce the harm from tobacco use. 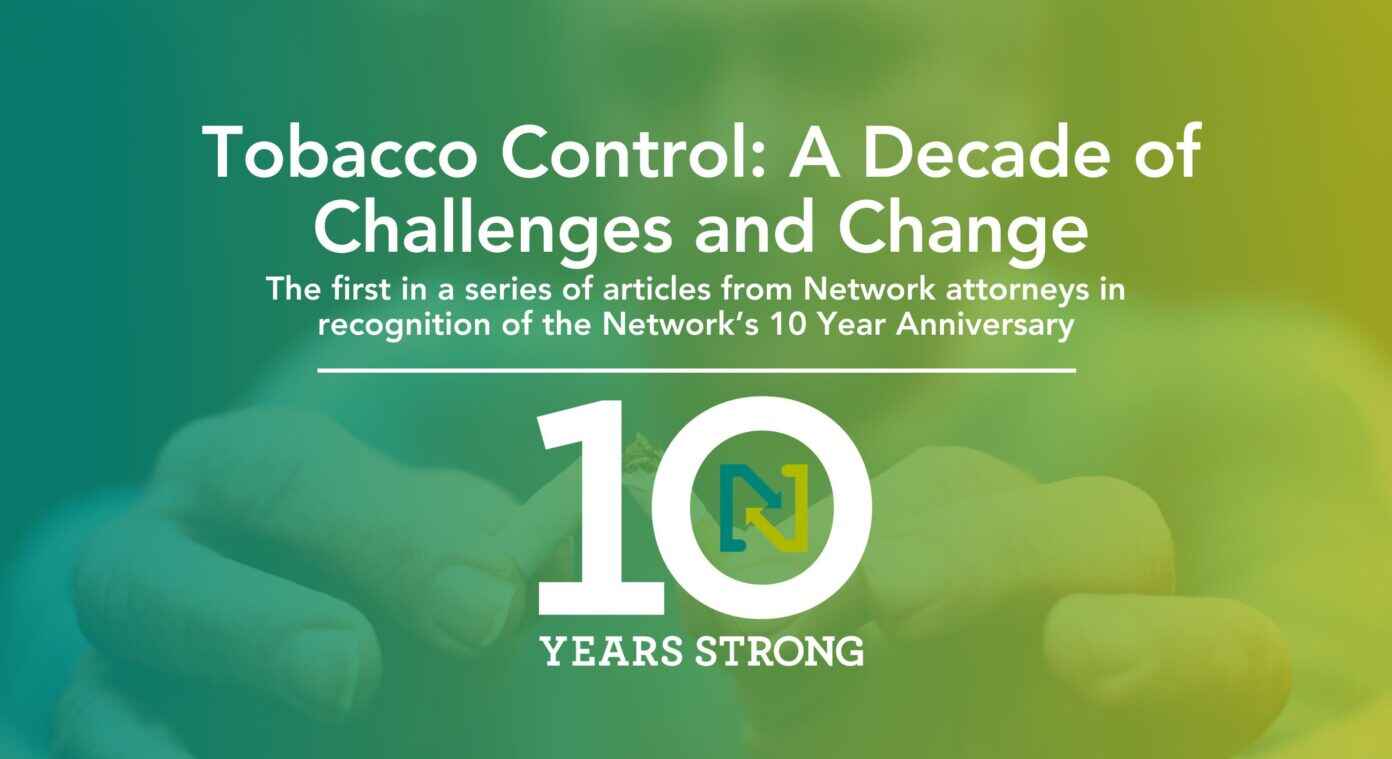 In the midst of the pandemic last Fall, I realized that the Network for Public Health Law has been providing legal technical assistance to state and local public health officials, legislators, advocacy organizations, researchers, and others working to improve public health through law and policy change for just over a DECADE! So much has changed in public health law over that time. In fact, we have really come into our own as a discipline separate from health law and separate from public health policy.

We are building the field through educating and training law students, novice lawyers, and established attorneys specializing in public health adjacent fields like transportation, education, and social justice. Personally, it has been an amazing 10 years that grew from my initial foray into public health through tobacco regulation. In just this one area of public health law—tobacco regulation—so much has changed in a decade. Indulge me in a trip through the last ten years in tobacco law and policy development!

Tobacco use, particularly smoking, has been the leading cause of preventable death in the United States for decades. The first Surgeon General Report on smoking was released in 1964. Since then, the public health community has made great strides to reduce tobacco use initiation and to increase tobacco use cessation. Public health laws have always played a role in those efforts, along with health communication, pharmaceutical development, and law enforcement. Just as the tobacco industry has changed tremendously in the last decade, so have the laws designed to reduce the harm from tobacco use.

Perhaps the most significant change occurred with the passage of the Family Smoking Prevention and Tobacco Control Act (TCA) signed by President Obama in 2009. As a result of that legislation, the Food and Drug Administration (FDA) created the Center for Tobacco Products (CTP), which has plenary power to regulate all tobacco products. While some federal agencies had regulated tobacco marketing (television ads, health warnings on packages), smuggling, and taxation, the TCA was the first broad grant of regulatory power over the actual products.

In my capacity as director of the LRC, in Maryland, I have helped several counties as well as the state legislature pass effective laws to require licenses for entities that sell any type of tobacco product, not just cigarettes; to raise the age of access to 21; and to impose civil penalties on retailers who sell to kids. We are currently watching the Maryland General Assembly debate whether to pass a prohibition on the sale of flavored tobacco products, including the ubiquitous vape products now wildly popular with youth but not even on the market when the Network launched in 2010. As the legislature considers the bill, they do so knowing that there is solid legal analysis and substantial case law concluding that the TCA does not preempt such efforts. They know because public health lawyers have done the analysis and tried those cases successfully for other jurisdictions that passed flavored tobacco bans.

Public health lawyers working in tobacco control have spent a lot of time in court over the last decade. We have supported the CTP’s efforts at imposing graphic warning labels on cigarette packing and helped public health organizations sue the agency when they failed to propose new regulations years after the first set was struck down on First Amendment grounds. The new final rule was published in May 2020 and faces new challenges in court. Public health lawyers are supporting the CTP’s defense of the regulation. We demanded that the CTP exercise authority over all tobacco products, including vapes; then after the agency did so, we sued them to actually follow their own regulations on vape products. We continue to help public health and social justice organizations press the CTP to prohibit the sale of menthol cigarettes; that case is now pending in federal court.

Behind the scenes, we have been at the table with state and local officials looking ahead to the next 10 years and strategizing about innovative laws and policies that will take tobacco control to the next level. Whether that will come through laws that favor some products over others based on the sliding scale of harm, or the tobacco end game movement to eliminate all tobacco sales—policymakers, public health officials, and community organizations will continue to effectively utilize public health lawyers to understand the legal—and sometimes political—boundaries of law and policy change.

Ten years later the world of tobacco regulation is vastly different. I am proud to have been part of the public health bar that has instigated, forced, and supported positive change. It has been the Network’s goal to provide this support and to grow the public health bar while doing so. With 10 years of solid accomplishments under our belt, we’ve only just begun.