The Affordable Care Act (ACA) was signed into law in March of 2010 and despite repeated attacks, not only has it survived – it has thrived, and continues to provide tens of millions of Americans with access to health care coverage. Let’s start with a look at the ACA by the numbers: 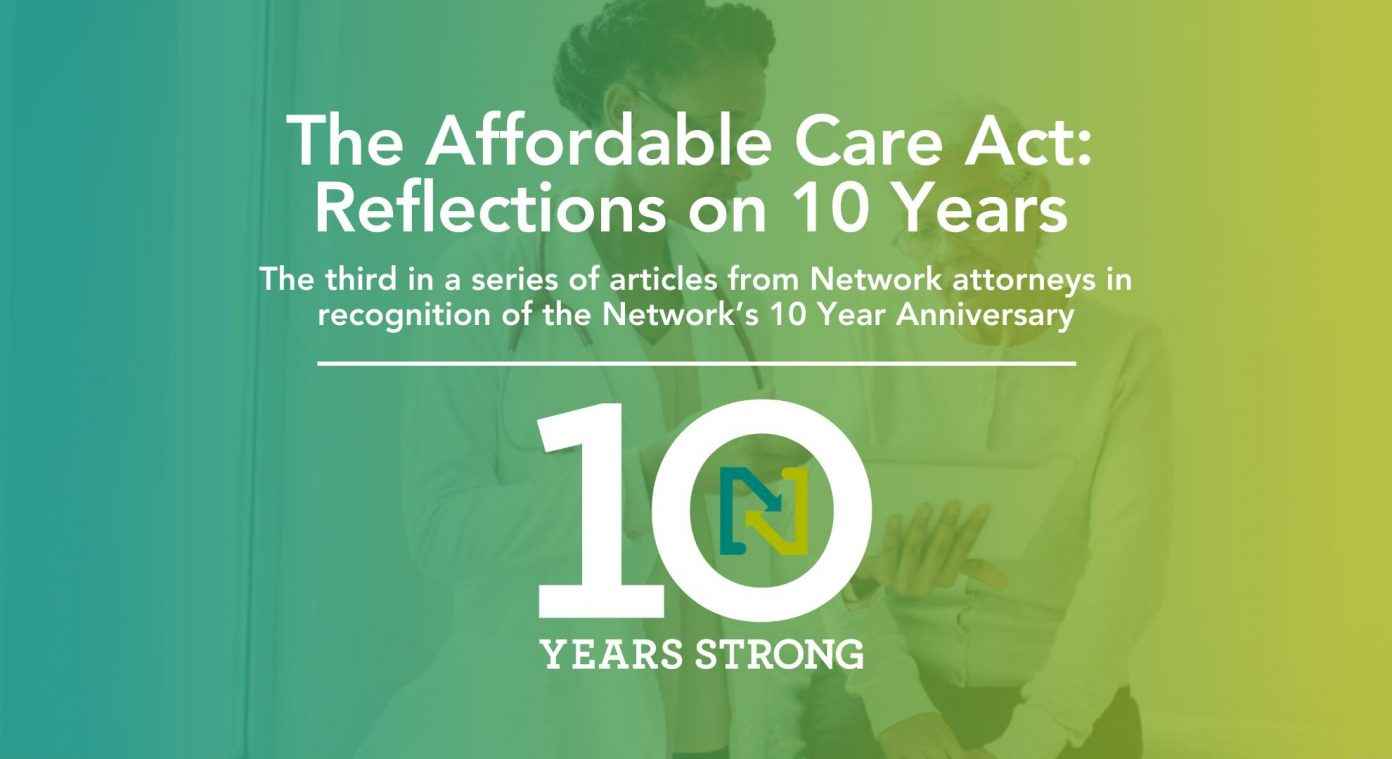 The numbers tell the story. Because of the law, millions of people gained insurance coverage for the first time. Millions more have increased security when insured, benefitting from prohibitions on discrimination by insurers and protections for people with preexisting conditions.

After years of neglect and sabotage, the Biden administration burst out of the gate with executive orders and proposed legislation to strengthen the ACA, and the 117th Congress passed a massive economic rescue package that includes funding to strengthen and expand the ACA’s reach and effectiveness.  Yet, an imminent decision from the Supreme Court could threaten the ACA’s success – and its very existence.

As we consider the past 10 years of the ACA, here are some of the significant events and greatest successes in its history, along with a preview of things to come.

The ACA was passed by a Democratic Congress and signed by a Democratic president in 2010.  This political configuration lasted only for the first two years of the Obama administration. Once Republicans gained control of Congress in 2013, having campaigned on a promise to repeal the ACA, they made more than 50 attempts to eliminate the law. President Obama vetoed attempts at outright repeal, but some targeted actions were successful, as Congress made use of its appropriation power that the President either could not or chose not to fight.

For example, the ACA created a Prevention and Public Health Fund, initially authorized to disburse $15 billion over 10 years.  These funds were to be used for, among other things, programs to increase access to primary care and preventive care. After Republicans gained control of Congress in 2013, they made repeated cuts to the Fund. The ACA also created a “risk corridors” program, which limited insurer profits and losses for the first three years of the program. This was intended to insulate insurers covering high needs patients from significant losses, as the ACA prohibited plans from discriminating based on health condition. As expected, the federal government owed plans billions, however, a now-hostile Congress attached riders to the appropriations bills preventing the use of these funds for payments. This undermined insurer confidence and increased premiums. This ultimately led to a successful lawsuit by the insurers, but caused significant disruption at the outset of the program.

When Trump took office in 2017 and Congress was under Republican control, it was widely expected that the ACA’s days were numbered. But, defying expectations, the ACA survived largely intact. One notable exception was a repeal of the financial penalty for violating the ACA’s individual mandate.  As discussed below, this repeal was a response to the Supreme Court’s failure to strike down the individual mandate in 2013 and set up a future challenge to the law.

The ACA’s opponents targeted the law before it even made it through Congress. Four lawsuits alleging that the law was unconstitutional were filed the very day that President Obama signed the legislation and opponents brought dozens more challenges over the next few years.  The first serious challenges to the Act culminated in the Supreme Court case National Federation of Independent Business v. Sebelius.  The plaintiffs in this case argued that the ACA’s individual mandate and the mandatory Medicaid expansion were unconstitutional and that the entire law should be struck down. The Court held that Congress exceeded its powers under the Commerce Clause when it enacted the individual mandate, but that the provision was a valid exercise of the taxing power. The majority reasoned that the individual mandate payment, though not called a tax, operated like one: it is paid to the Treasury, it does not apply to individuals who don’t pay taxes, and it is found in the IRS code. However, the Court also held that requiring states to expand Medicaid or forfeit federal funding violated the Tenth Amendment because it was unduly coercive. While this decision left nearly all of the ACA intact, it effectively made a state’s decision whether to expand Medicaid optional – and millions are paying the price.

Nearly a decade later, another case at the Court, Texas v. California, presents another existential threat to the law. In this challenge, a group of state attorneys general and two individuals argued that, because Congress had eliminated the financial penalty for not having insurance, the individual mandate is not constitutional because it no longer operates as a tax. Moreover, they argued that the remaining provisions of the ACA could not be severed from the mandate and that the entire law should be struck down. A district court judge in Texas obliged, striking down the entire law.

On appeal, the Fifth Circuit agreed that the mandate was unconstitutional, remanding to the district court to determine whether it was severable from the remainder of the ACA. During the case, the Trump administration declined to defend the ACA and supported Texas and its allied states. California and 20 other state attorneys general intervened to defend the law, later petitioning the Supreme Court for review before remand. Review was granted, and the case was argued in November 2020.

The Court has not yet ruled. Based on the argument, the Court appeared skeptical of the central theory of the case and particularly unconvinced of the need to strike down the entire law. That said, given the high stakes and the fact that the fate of insurance coverage for millions hangs in the balance, including many lesser-known provisions such as the permanent reauthorization of the Indian Health Care Improvement Act, public health proponents are on edge.

The Impact of the ACA

The ACA was intended to expand options for health coverage, reform the insurance system, increase coverage for services (particularly preventive services), and provide a funding stream to improve quality of services.  By any metric, it has been wildly successful.

Has it improved coverage? Indisputably, yes. More than 20 million people have gained coverage as a result of the ACA.  It has dramatically reduced the uninsured rate.  On the day President Obama signed the ACA, 16 percent of Americans were uninsured; in March 2020, it was nine percent.

Health access?  Again, yes. The ACA’s first two open enrollment periods showed significant improvement not only in rates of coverage, but also in access to care, including access to a personal physician and medications, and improved reported health status.

The ACA’s Medicaid expansion in particular dramatically improved the lives of enrollees and benefitted communities in general. The expansion has been or is in the process of being adopted by 38 states and the District of Columbia, including states like Idaho, Utah, and Nebraska that have adopted the expansion as a result of ballot initiatives.  Access to care improved: more low-income adults had personal physicians, got check-ups and other preventive care, as well as care for chronic conditions. Studies showed more people receiving medication-assisted treatment for opioid disorders and decreases in hospitalizations for overdoses. Access to mental health care improved. The expansion also reduced racial and ethnic disparities in both coverage and access to care. Among other improvements, the gap in uninsured rates between white and Black adults shrank by 51 percent in expansion states, but only 33 percent in non-expansion states. The gap between insurance rates between white and Hispanic adults was reduced by 45 percent in expansion states versus 27 percent in non-expansion states.

Financial wellbeing of Medicaid beneficiaries improved; fewer low-income adults struggled to pay medical bills, medical debt and evictions were reduced.  At the same time, there was a significant drop in hospital uncompensated care in Medicaid expansion states. One study found that uncompensated care costs dropped 55 percent between 2013 and 2017, while falling only two percent in non-expansion states.

People insured by plans purchased through the marketplace also saw improvements. Not only did more people obtain insurance coverage, the plans sold on the marketplace offered a much better and more comprehensive health care package.  People protected through marketplace plans also received more consumer protections, including prohibitions on discrimination based on health status or pre-existing conditions. In sum, despite a lengthy and sustained campaign to destroy it, the ACA has fulfilled much of its promise.

Now (at least for the next two years) the legislative threat to the ACA is gone and there is an opportunity to improve and expand it.  A week after his inauguration, President Biden signed an executive order re-opening enrollment to the marketplace. Just over two months after he took office, Congress passed and President Biden signed the American Rescue Plan (ARP) Act. The $1.9 trillion plan, passed to respond to the COVID-19 pandemic, includes a number of provisions that build on key ACA measures. First, the ARP includes an incentive designed to entice state leaders in the 12 holdout states to expand Medicaid. In addition to the 90 percent match that states already receive when they expand Medicaid, they would receive an additional five percent federal match for their remaining Medicaid population. This would bring in nearly four million uninsured low-income adults – nearly 60 percent of whom are people of color. It remains to be seen whether this significant financial incentive will be enough to convince these long-resisting state legislatures and executives to expand, when much of their opposition is ideological rather than practical. But, boosters of the Medicaid expansion hope it will help to turn the tide toward universal adoption.

The ARP also reduces premiums for coverage bought through the Marketplace and expands the eligibility for premium tax credits.  Now, individuals with incomes less than 150 percent of the federal poverty line (FPL) are eligible for plans with $0 premiums – a reduction of about two percent for those at 100 to 133 percent of poverty and three to four percent for those between 133 and 150 percent.  There are comparable reductions for those between 150 to 400 percent. (See the chart here for a breakdown). And, ARP provides for subsidies for those over 400 percent of FPL – premium contributions will be capped at 8.5 percent of their income.

These reductions address one of the persistent criticisms of the ACA – that too many enrollees in Marketplace plans paid too much of their income for premiums.  Policy makers and others hope that this will not only continue to build public support for the ACA but also help bring about one of the central goals of the ACA – ensuring that all Americans have meaningful insurance coverage.

Congress and the administration have a time-limited opportunity to improve and expand the ACA. President Biden’s administration has already issued a health care plan that would build on the ACA, including adding a Medicare-like public option and allowing undocumented immigrants to buy into it.  At the same time, the Supreme Court will issue its opinion in California v. Texas sometime before the term ends in June, potentially striking down the ACA and throwing the health care system into chaos.  By summer, we will know which way the future lies.